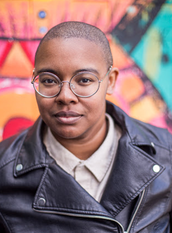 In this issue, we’d like to spotlight Rivers Solomon, award winning writer of Afrofuturist and speculative fiction. Solomon’s first two books, An Unkindness of Ghosts (Akashic Books 2017) and The Deep (Saga Press 2019), have garnered critical and popular acclaim, and their next book, Sorrowland (MCD, FSG), is set to be released in May of 2021.

An Unkindness of Ghosts is about a generation ship, humanity’s last shot at existence, on its way to an uncertain future. Modeled after the last slave ship to make its way to the Americas, the spaceship Matilda is full of souls on a passage which does not guarantee their survival. The rootlessness of the characters doesn’t translate to a rootlessness in the narrative, however, because the world Aster Gray and her counterparts occupy is rich, dark, and infused with historical and psychological questions of race, class, and human consciousness.

In 2017, Solomon was approached by clipping, an experimental hip-hop group comprised of Daveed Diggs, William Hutson, and Jonathan Snipes. They collaborated to write a novella based on the The Deep’s concept: underwater beings, the descendants of enslaved women thrown overboard en route to America, face climate disaster and confront the weight of their own history. You can listen to clipping.’s track here, and buy Solomon’s novella here.

Solomon was born in America, graduated from Stanford and was a fellow at The University of Texas’s Michener Center. They now live in Cambridge with their family, and tweet at @cyborgyndroid. You can read more about their work here.
Read more